Description of the Result

Integration of the Latin American Giant Observatory (LAGO) data within EOSC. Given the peculiar characteristics of LAGO, working as a distributed observatory operating in very different countries, LAGO had been a ected by the lack of computing resources for simulation, data analysis and storage since its creation. So, thanks to the integration of their computing frameworks into the EOSC portfolio of services will largely enhance the scientific and social impact of LAGO.

LAGO is an international collaboration composed of more than 11 Latin American countries. It targets primarily the Astroparticle and high-energy physics community, aerospatial and mining industries, but enables application to societal problems such as Space weather and irradiation (to be suffered by air plane travellers and crews), Volcanology and extreme climate phenomena, etc.

One of the main issues in Astrophysics and High Energy Physics studies is detailed calculation of space radiation at ground level. LAGO calculates the signals originated by cosmic radiation at any place in the World in a very precise way under realistic atmospheric and geomagnetic time-evolving conditions. The service enables the standardised simulation of radiation on a cloud infrastructure making use of FAIR data.

LAGO is a large collaboration spanning applications in several scientific and societal domains. In addition, it supports training activities for BSc and PhD students to develop their skills in a mix of technological and scientific areas related to the detectors development. Access to open source and open access repositories integrated in EOSC will further enhance their impact and the collaborations with external institutions on the aforementioned S&T and training goals.

Use and Impact after EOSC Synergy

By making available their data in a transparent and standardised way will result in collaborations with world wide institutions as well as on new opportunities for hosting LAGO scholars and BSc/MSc/PhD students in European institutions and vice versa.

Key exploitation channels will include scientific papers, industrial workshops, as well as institutional (catalogue of resources, scientific weeks, courses) channels. During the EOSC Synergy project the Thematic Service has been presented and demonstrated several times to physics and astrophysics communities at various venues in European and in Latin American countries. 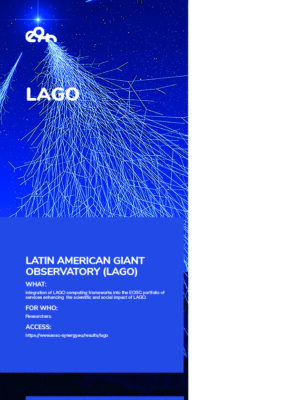 How to search and open-access to published Datasets (at EGI DataHub and harvested by B2FIND, several alternative links): 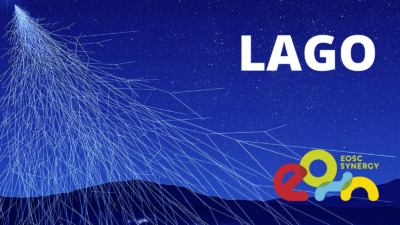